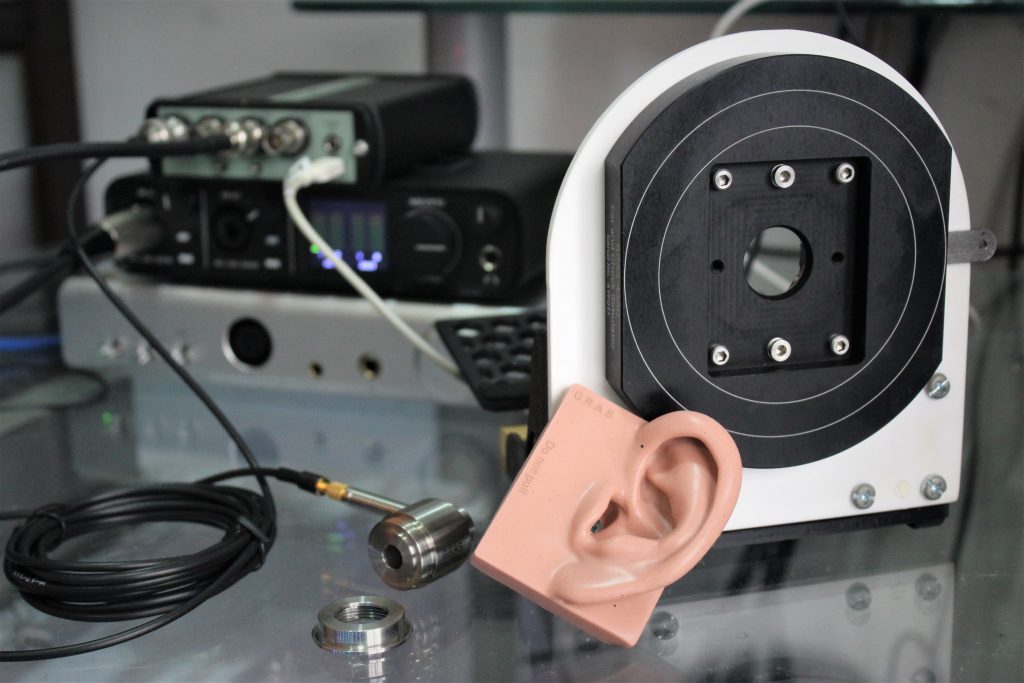 After a month-long wait for the final few components from the factory, may I present the instrument that will build IEF’s headphone measurements database from here on out: the GRAS 43AG-7.

Special thanks to the following who have contributed at least $1,000 to the crowdfunding campaign: 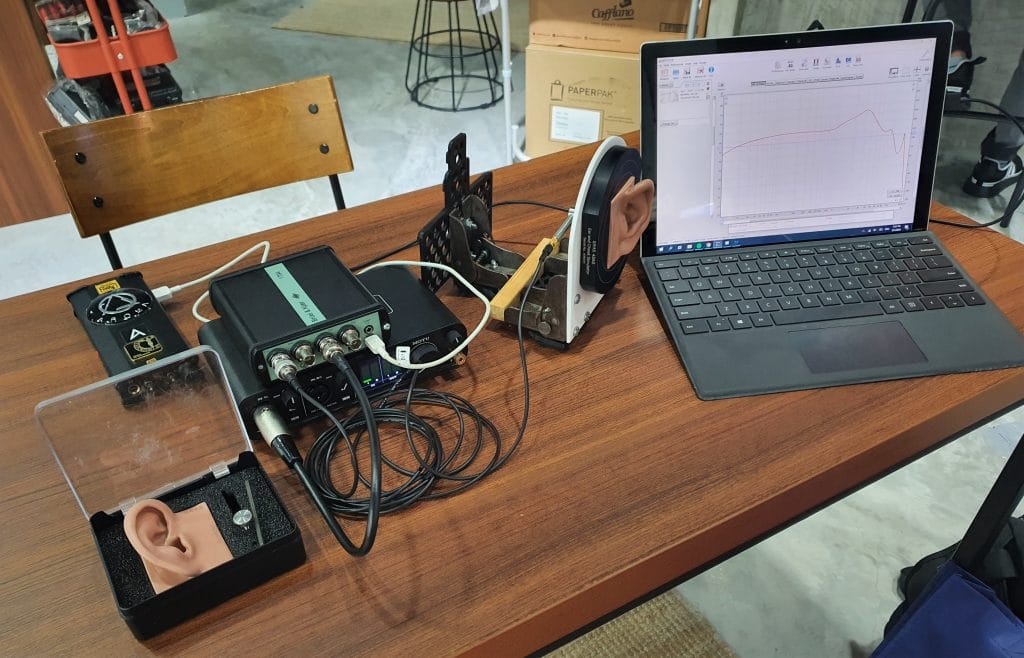 From the source-outwards, the audio chain is as follows:

The foldable mounting system designed to accomodate the miniDSP EARS pinna of the old system has been repurposed to accomodate the GRAS RA0314 cheek plate instead, so as to keep everything as portable as possible. The stands are separated by 150mm so as to more closely emulate the average breadth of a human head, and so allow for more realistic clamping force on any given headphone.

It doesn’t look too terribly portable for now, but with the arrival of a newly ordered 8″ laptop to replace my aging Surface Pro 4 (that comes with only a single USB port, curse you Microsoft!), the whole setup can be powered off a single device. After some tetris-ing of the laptop together with the signal conditioner and the audio interface using some 3M Dual-Lock fasteners, the whole things should be portable enough to lug around in a camera bag. Hopefully.

Pretty simple: as I typically take measurements in audio stores, I require the rig to be as portable as possible. As such, full head-and-torso simulators (or even dual-channel simulators) aren’t the most appropriate.

The 43AG is a single-channel measurement setup which means that it is literally half the cost of standard dual-channel setups by virtue of being… well, half of that. Apart from cost, this also means that a 43AG takes up half the space of a 45CA. Even less so in my case given the foldable mounting system.

Another big thing is cross-comparability; while something like a B&K Type 5128 is arguably more accurate (though I would argue otherwise personally), the combination of it being a complete redesign of IEC60318-4 (thus not to “industry standard”) and limited adoption by mainstream graph publishers as of yet makes it so that any data generated on said rig would essentially be “trailblazing”. Maybe great for hardcore R&D into some newfangled headphone, but not exactly optimal for my usecase.

Here are a list of known headphone measurement databases that are comparable to any future (headphone) measurements done on IEF:

Somewhat incomparable databases but can be extrapolated if you’re experienced:

Also, the 43AG-7 is 100% compatible with Harman research without any fiddling with calibrations (given that Harman research was performed on a GRAS KEMAR). So that’s a pretty big plus there given the increasing popularity of Harman Target compensations.

Fate of the IEM database

So with this new setup, what happens to the IEM database?

First, we need to look at the differences between the current 711 coupler being used to populate the IEM database, and the GRAS RA0402. To keep the variables as minimal as possible, IEMs measured on the RA0402 will be done with the metal canal extension rather than the KB500X pinna simulator.

Also just taking a random IEM lying around because I’m too lazy to find anything less obscure:

The old 711 coupler is relatively similar to the RA0402 up till 2.5kHz, where it dips between 3kHz and 7kHz. That and the resonance damping structure of the RA0402 reducing the response at 8kHz, which is where I target my measurements’ resonance for consistency.

And of course large differences post 10kHz, though that’s expected and something that I’ve told everyone not to take too seriously anyways.

Normalising the plots show the relative differences between the two, which doesn’t look too bad:

Do note that this is a sample size of one so there may be other differences with other kinds of IEMs. But based on the current dataset, the calculated differences seem to line up relatively well with Jakko Pasanen’s study on my 711 coupler versus a GRAS 45CA.

At any case, the biggest selling point of the IEF IEM database isn’t in its raw accuracy (which is expensive and impractical to chase for anyways) but rather the relative precision and internal comparability of each measurement. And given that I already have 2,000+ individual measurements in the database with just under 800 separate IEM models… restarting the database is impractical and arguably detrimental.

So going forward, the IEM database will continue to use my existing 711 coupler. Certainly not ideal given that it’s still slightly off from a GRAS RA0402 (though still well within IEC60318-4 specifications), but the database is basically its own standard these days given the sheer volume of entries anyways. As such, continuing with the old coupler makes more sense to maintain precision, repeatability and comparability, and less confusion regarding “crossing the streams”, if you will.

Just like with my own “neutral target” for IEMs, the IEF Neutral Target is basically my attempt to make a flat line mean “perceptibly flat” as well. The current norm is to compensate to Diffuse Field, which is a little iffy on headphones since I find headphones tuned to strict-DF to be rather bright and shouty and still. So I turn to Harman’s research, whose “linear in-room” measurements are a little more conservative in the “head gain” regions compared to DF:

That said, something like the Harman AE/OE 2017 target is more in line with what I perceive as neutrality in the midrange-upwards, so I decided to go with that instead.

The IEF Neutral Target is basically a modified Harman AE/OE 2017 target, with the frequencies from 900Hz and below being set to flat to represent “no compensation”. I find the lower frequencies to be relatively in line with raw measurements, so flat raw bass sounds reasonably flat to me still, however a roll-off to the magnitude of DF/Harman In-Room does sound like that to me: rolled off.

That said, once the graph comparison tool is up and running for data obtained on the 43AG-7, you should be able to compensate using a slew of other target curves such as Diffuse/Free Field (calibrated to a GRAS KEMAR 45BC), InnerFidelity’s Independent-of-Direction target, Rting’s proprietary target, and of course various Harman targets over the years.

For headphone measurements on IEF, graphs will be displayed with the following properties:

Disclaimer: graph formats are not final and subject to changes in the future.

Once my new laptop comes in and I fit everything into a more portable form factor, more measurements should start flowing in. Gearing up for some intense measuring sessions from here on out, so stay tuned.

Thank you to all who have contributed to the headphones measurement rig campaign.

As you may know, my initial campaign was a little too optimistic as I assumed that my current 711 coupler could be used in place of a GRAS RA0402 to get directly comparable results, which unfortunately was not the case. As such, I had to put in a purchase for the entire GRAS 43AG-7 setup, which raised the total cost from $5,000 to $9,000.

Regardless, the setup has already been purchased and so the project shall proceed as scheduled regardless of funding status, but if you’d like to contribute further for the exclusive perks the campaign will be up till the database is finalised and populated with a decent amount of entries. 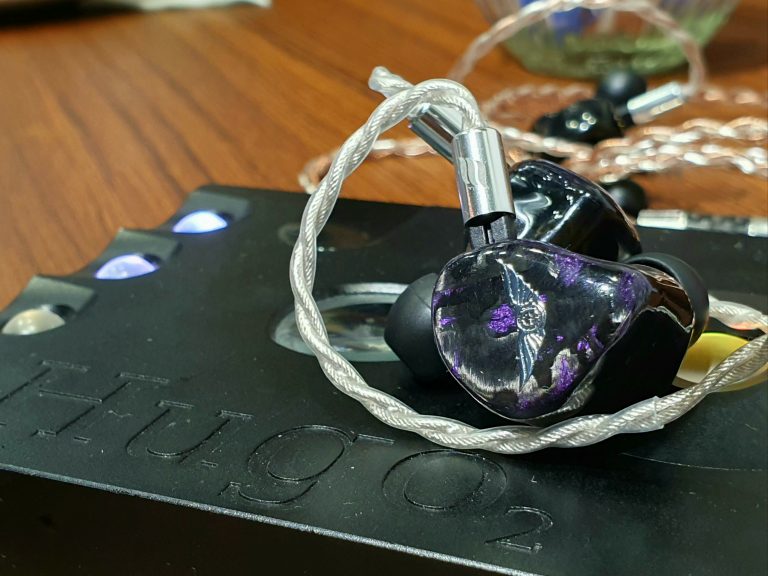